PNWRL Series Champions: A Thrilling Interview With The Vigilantes 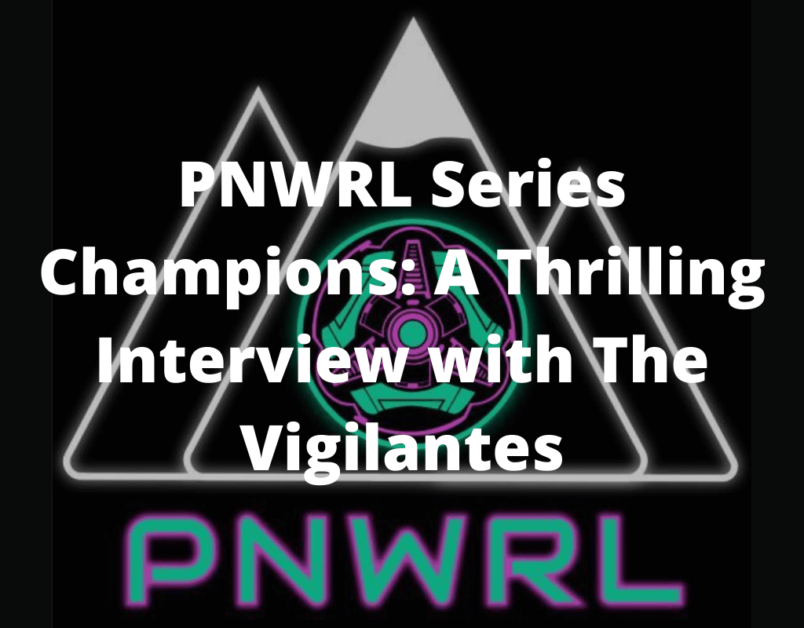 Season 0 has wrapped up and the PNWRL Series has their first champions. The Vigilantes ended the regular season with a record of 13-1, only losing to Second Round Exit in the beginning of the season. Therefore, it only made sense these two teams played in the championship game. If you missed this amazing matchup, go check out my playoff week three recap here.

The Vigilantes consist of Flask, GoldenLeafRanger, and Mickalodian. They all are ranked within the top 1% of all Rocket League players, and it shows.

I asked each of them 15 questions, after the championship, and here is how they answered.

How long have you been playing Rocket League?

Flask: Been playing for a year and a half.

GoldenLeafRanger: I played for the first time in late August 2015 on my buddies pc (Yes, I used a controller to play against the bots.)  I promptly bought it myself (switched to KBM) and have been playing ever since.

Mickalodian: August 2015. I happened to see Kronovi streaming Rocket League on twitch. I continued to watch him over the next few months until I got my first computer (a laptop) for my birthday and got to play for the first time. 25fps wasn’t ideal, but I was hooked and played every season since the start.

How often do you practice each week?

Flask: I try and practice a couple hours, 5 days a week usually.

GoldenLeafRanger: I play at least an hour a day normally (I miss days periodically). About 10-15 hours a week is pretty normal.

How did you hear about the PNWRL Series?

Flask: I knew the people who were starting it and they reached out and asked me. I’ve always wanted to get into the team/competitive scene. I was really excited to start with season 0 of PNWRL.

GoldenLeafRanger: I learned about PNWRL from Flask when he was putting our team together.

Mickalodian: My boy Flask asked Ranger and I if we wanted to team with him for a league. I was stoked to hear it was primarily a group of friends. Competition is always fun, but combining that with a cool community of Rocket Leaguers is hard to find.

What team do you feel improved the most this season?

Flask: Zero Impact really pulled it together as a team as the season went on. It was really cool to watch.

GoldenLeafRanger: That is a tough one. Everybody improved an enormous amount. If I had to pick one team it would be the Washington RL Team. (Keep getting those explosions Gary!)

Mickalodian: Did a scrim against Meksend0’s team, Zero Impact, near the end of the season and I was extremely impressed with how they played. Could definitely tell they’d been putting in the time.

What would you like to see improved in the PNWRL Series?

Flask: I would love to see the stream take off more with viewers and activity in general. Also excited to see how the overlay gets decked out.

GoldenLeafRanger: More permanent access to vods would be really good.

Mickalodian: I’m really hoping we can get a bunch more teams to join so we can create multiple skill divisions for the regular season. I think that would provide a more competitive environment for both new and experienced players. With how great things started off, I’m sure we’ll be able to get there.

Do you have a favorite training pack or workshop map?

What do you look forward to in Season 1?

Flask: With season 0 being done, teams have gotten the feel of their teammates as well as other teams. It’s gonna come down to who wants it more. I’m looking forward to being full sweat mode all season.

GoldenLeafRanger: Getting new teams into the league and seeing the improvement of all the current teams. Should be an absolute blast!

Mickalodian: It’s crazy fun to play Rocket League with a team of friends. I’m excited to keep grinding with the boys. Our aim is to continue holding our number one spot and come into Season 1 even stronger.

What team was your favorite to play against?

Flask: Hands down Second Round Exit.

GoldenLeafRanger: I enjoyed playing most of the teams this season, but Second Round Exit was my favorite team to play against for sure. Going up against their defence with our offense was so much fun/ kind of frustrating.

Mickalodian: I think battling for the number one spot against Second Round Exit made matches against them especially fun. The opposing play styles of heavy defense vs heavy offense also made for an interesting matchup.

Is there anything you plan on improving in the off season?

Flask: Yeah quite a bit. Don’t wanna give my secrets away but I’m more of a threat in the air than on the ground. So I plan to make them at least even.

GoldenLeafRanger: My goals for the offseason are as follows: learn the speed flip, get faster at flicks, and learn to use stalling for flip resets.

Mickalodian: Been heavily focusing on becoming consistent with some mechanics I’ve put aside for too long. Speed flips, flip resets, stalls. Also grinding ranked a lot.

Do you watch the RLCS? If so, what is your favorite team?

GoldenLeafRanger: I have watched the RLCS since Season 3 Worlds and I went back and watched the first two seasons right after I watched season 3. If I had to pick a favorite team right now it would be NRG, but it’s whatever team Kronovi is on.

Mickalodian: Really the only sport that I watch/follow anymore is RLCS. I’ve been a lifelong G2 fan. Favorite players are Jknaps and GarrettG.

When you are not playing Rocket League, what game(s) do you like to play?

GoldenLeafRanger: Right now I play some RTS games like Age of Empires 2 and Northgard. I normally play turn based strategy games and I have played a decent amount of Rainbow Six Siege. (I suck at fps though.)

Mickalodian: I grew up playing Age of Empires so I often find myself in the RTS or MOBA realm. Enjoy most any game if I’m playing with friends.

What is your favorite thing about the PNWRL Series?

Flask: I love the community of players. There isn’t one person who wouldn’t play with the other no matter the ranks.

GoldenLeafRanger: The community is amazing, and the fact that they have a website with stats makes me super happy. The commentators are my favorite though. (Be nice to me boys.) 🙂

Mickalodian: Without a doubt it has to be the community. Everyone has been so welcoming and I think we’ve all had a blast enjoying Rocket League together.

What advice would you give a newer Rocket League player, to help them improve?

GoldenLeafRanger: In the words of King Kronovi “Consistency is the number one thing in rocket league.” Focus on hitting the ball with your nose and right after it touches a surface. This will teach you how to hit the ball hard all the time, which is useful no matter what rank you are at in the game. If you become consistent at this your shooting, passing, and defensive clears will all vastly improve. Once you are past this stage work on one to two different skills/mechanics at a time, and continue to work on those until you have at least a 30-50% rate of consistency at them.

Mickalodian: There’s lots of really good YouTube tutorials out there now that I never had when I started. Take advantage of them. Do training training packs, free play is your new home, and grind ranked. If you intentionally focus on improving all that remains is putting in the hours. Rocket League isn’t like any other game, so expect it to take awhile. I didn’t get to Grand Champ until ~1800 hrs. You can do it. I believe.

What team gave you the hardest time this season?

Flask: Aerial Astronauts. Their play style countered ours a lot of the time.

GoldenLeafRanger: That’s a tough one. If I had to pick one team it would be Aerial Astronauts. They are a fast team that excels at mechanics. Essentially they are good at what I’m bad at.

Mickalodian: Not a fan of playing Aerial Astronauts haha. Every match always felt chaotic and unpredictable. Something about our playstyles clashed in a weird way.

Who do you think would win in a 1v1: Obrocho or Hoekie?

Flask: Haven’t seen either of them play in a long time….. I am a fan of high energy so my money would be on Obrocho

Mickalodian: Did someone say double McChicken?

Get ready for season 1

Well there you have it. Great responses from our Season 0 champions! Also, it looks like we need to see an Obrocho vs Hoekie showdown and possibly get a double McChicken for Mick.

Well, Season 1 is just around the corner and I am looking forward to seeing all the new teams show up and watching the PNWRL Series grow. Will The Vigilantes get another championship? Or will a different team take their place? Keep an eye out for updates and check out the recap of season 0.

If you would like to join the PNWRL Series and give The Vigilantes a run for their money, browse the website and join the discord!