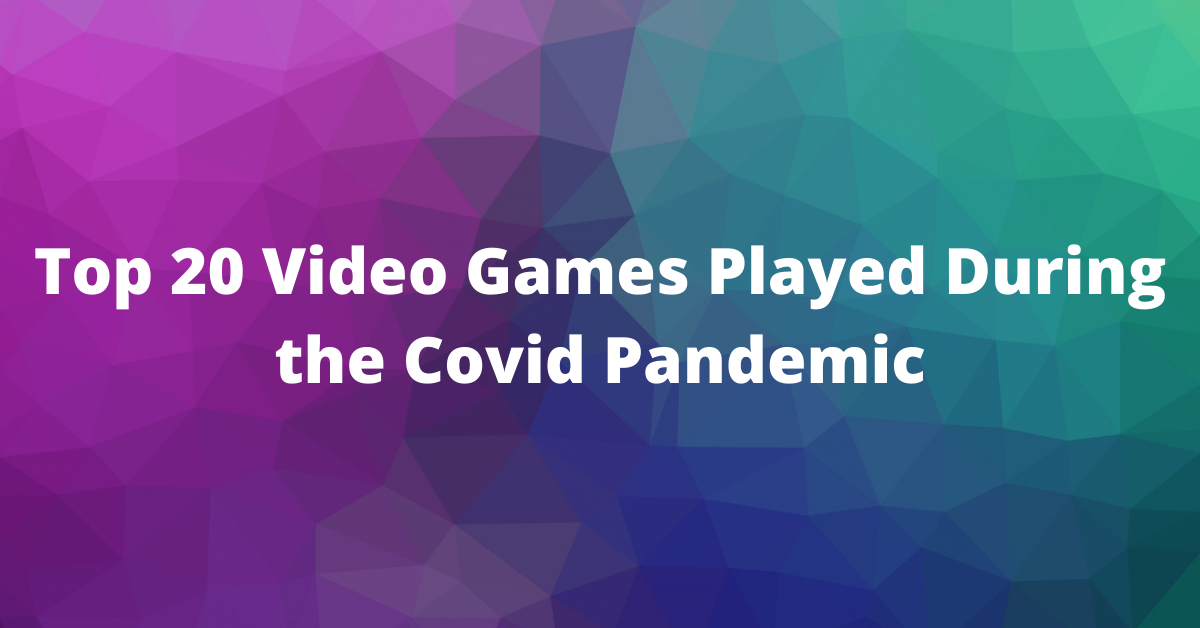 During this pandemic, many of us have spent more time at home either from school or work. This, in turn, has caused a rise in the amount video games being played.

I gathered responses from over 300 people to see what everyone has been putting their extra free time into. Here are the top 20 video games played during the Covid pandemic.

During this pandemic, a lot of us were trying to be more creative in our free time. Minecraft has been one of the most popular creative games of the last decade. So, it’s no surprise Minecraft came in at the number one spot.

There have been constant updates since Microsoft purchased Minecraft in 2014. Also, with Minecraft Realms you and your friends can have a place to call your own. If you haven’t played in a while, there is no better time to play than now.

Animal Crossing has been one of the most anticipated new releases for the Nintendo Switch. Noted as a social simulation game, releasing in 2020 was perfect. Instead of being cooped up indoors, you can go visit your home away from home enjoy that freedom once more.

Animal Crossing was a much-needed way to gather with friends virtually and casually. It definitely helped fill the void that of hanging out with friends.

Red Dead Redemption 2 is your standard massive open world game. This game is perfect for the people missing out on being able to travel and go on their own adventures. There are hundreds of hours of content to explore. I was always sidetracked by side quests, I never got around to finishing the game. Having all of this extra time, I was finally able to do that.

Another simulation game in the top 5, Stardew Valley definitely deserves a spot here. Taking its roots from Harvest Moon, this is the epitome of a relaxing game. I, like many others, spent countless hours perfecting my farm. Traversing through the seasons, I never felt stressed. This was my go-to game to wind down for the day.

Cyberpunk 2077 had one of the roughest launches in video game history. So bad it even got pulled from the Xbox and PlayStation stores. Yet, dedication paid off as the developers put countless hours in to updating and “fixing” the game.

Now Night City is a great place to explore and live in that futuristic lifestyle. Another game with hundreds of hours of content, Cyberpunk is a great way to spend that extra time.

The first major multiplayer game in this list is Call of Duty Black Ops: Cold War. Releasing during the peak of the pandemic, many people were happy to be playing with other people. And zombies are one of the best game modes to play with a group of friends.

Doom Eternal released at the beginning of the pandemic. Many people bought the game out of nostalgia for the old Doom series. And people were not disappointed. With tons of action and a decent story, you can’t go wrong with this one.

The first PlayStation exclusive on the list, Ghost of Tsushima comes in at number eight. Ghost of Tsushima is a beautiful game, winning the award for best art direction in 2020. The story and gameplay are no joke either and can prove to be a little challenging at times. But, if you are up to the challenge, it is a must buy.

Hades is one of the best roguelike games to ever be released. Winning many game of the year awards, it’s a surprise that it didn’t rank higher. The game is very challenging, and you will die…..a lot. But that is the nature of these games, and it is a great feeling when you finally defeat a boss.

Apex Legends is the only battle royal game on this list. Constant updates, more champions, and fast gameplay has made Apex stand out from its competition. Grab some of your friends, or find new ones, and try to be the last team standing!

Another nostalgic game on the list, Call of Duty: Modern Warfare 2 was one of the most popular games in the franchise. So, it’s no wonder that when the remastered campaign was released in 2020 that people would spend so much time playing it. I can still remember playing this in my teens, and how it was one of the most controversial campaigns at that time.

The first, and only, MMO in the top 20. Final Fantasy is one of the best-known franchises in all of gaming. Combine that with an MMO that has been doing just as good as World of Warcraft these last few years, and you are sure to see a spike in players during a pandemic. This is the first game I have put over 1000 hours into, and that was before the new DLC that just came out!

Persona 5 is another PlayStation exclusive. It isn’t a new game, as it came out in 2016. With many RPG elements and a compelling story filled with social scenarios, this game is just what people needed to endure this pandemic.

Ah, Skyrim. The game that never goes away. And for good reason too. With countless mods and hours upon hours of gameplay, it’s no wonder people always turn to this game for an incredible open world experience. Instead of worrying about wearing a mask or isolating yourself, you can worry about slaying dragons and taking an arrow to the knee.

I recently got into Monster Hunter Rise as it was released on PC. Being a huge fan of Monster Hunter World, I was really excited for this one. Monster Hunter is a tough game but is very rewarding when you finish hunting that 7-star monster. Mainly meant to be played with others, this is a great game to play with your friends.

What a Save! Great Pass! Nice Shot! Rocket League is the perfect game to scratch that competitive itch. In a time with sports being postponed or cancelled, Esports games like Rocket League were in the primetime. Many people were turned on to the RLCS (Rocket League Championship Series) via ESPN and Twitch. Along with the game going free to play, many people have learned how to play rocket car soccer these last couple years.

With the success of The Witcher series on Netflix, many people are reliving the greatness that is The Witcher 3: Wild Hunt. After binge watching the first season of The Witcher, I was itching to play The Witcher 3 again. And it seems others followed suit. Don’t forget to read the books too!

18. The Legend of Zelda: Breath of the Wild

The Legend of Zelda is an iconic franchise. Releasing with the Nintendo Switch several years ago, Breath of the Wild quickly became a fan favorite of the series. With a massive open world to explore and tons of puzzles to solve, people quickly flocked back to this game.

Assassins Creed is another popular franchise. With the major success of Origins and Odyssey, Valhalla had a lot of high expectations. Luckily, people were not disappointed. If you love Vikings and Norse mythology, this is the perfect game for you.

The ultimate tactical team game, Counter-Strike: Global Offensive finishes off at rank 20. A staple in the shooter genre, Counter-Strike has always been a fan favorite. For the highly competitive team player, this game is just what you need to get through this pandemic.

Gaming has become a very popular way to pass the time during this unfortunate pandemic. Single player games seemed to be the popular choice as people are drawn into amazing stories. However, for those seeking some social interaction, there are plenty of games on this list too. So, what game helped you get through this pandemic?