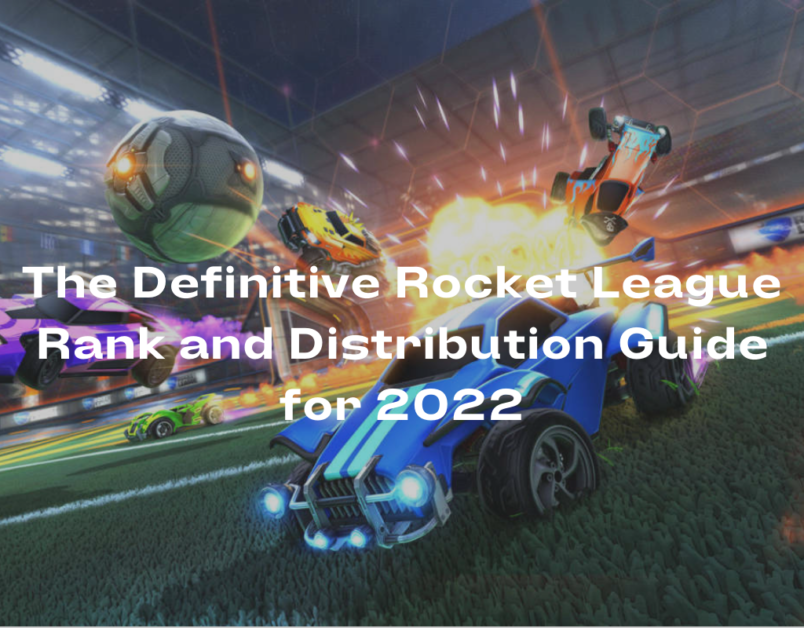 Over the years, Rocket League has grown to be one of the most competitive games out there. With a popular eSports league and over one million daily players, it’s no wonder people are willing to put the time in to climb the ranks. In this guide, I will discuss the different ranks and their tiers, what MMR is and how to check it, and the overall distribution of players in each rank.

Whether you play the standard competitive modes or like the extra modes (Rumble is one favorite of mine), there is something for everyone. It’s pretty simple, you win a game and your rank goes up. You lose a game, your rank goes down.

The amount of rank you gain or lose will ultimately depend on how your opponents are ranked compared to you. Getting 10 goals in a match will net you the same Matchmaking Rank, or MMR (we will talk about this later), as if you were to score 1 goal. Therefore, don’t get upset if someone “steals” your goal, it’s more important to get that win.

In order to play in a ranked playlist, you will need to be level 10. Note that your level has nothing to do with your rank. You could be level 15 and be ranked in Diamond or level 1000 and be ranked Gold. Levels basically are associated with how long you have played the game. Since Rocket League uses the ELO system, you will only be paired with other players with similar rank as you.

What are the Different Ranks?

As of season 3, there are 8 ranks. Each rank, besides Supersonic Legend, are split into 3 tiers. And, each tier is split into 4 divisions. In order of lowest rank to highest rank they are:

Rocket League was officially released in 2015, however in 2020, they announced a major update to the ranking system. With so many players joining after their “free to play” update, they added a new rank to the list. Splitting Grand Champion into three tiers, they added Supersonic Legend as the top rank.

How do you get Ranked?

If you don’t play one game in a playlist for 30 days, you will go back to “Unranked” and have to play a couple more placement matches to get reevaluated.

There are currently 3 separate playlists ranging from 1v1 to 3v3 (sorry 4v4 Chaos fans). Standard is the most played playlist and in the RLCS and major tournaments, 3 player teams are the norm. Starting with Season 1, solo standard was removed from the competitive playlist.

With the exception of Hoops, these are all 3v3 playlists. Each one has something different than the normal playlists, bringing something new to the game.

In Rumble, you get special powerups you can use throughout the game. This is one of my favorites, and can lead to some good laughs when playing with friends.

Hoops is played on a smaller map with giant nets. In order to score you will have to hit the ball off the backboard or get some aerial goals.

Dropshot is completely different and is only played on one map. As the ball gets hit, it gains charge. Once it hits the ground, it unleashes its charge damaging tiles. It takes 2 hits to break a tile and reveal the goal.

Snow day is basically hockey on a soccer field. The ball is replaced with a puck, making it easier to keep on the ground and harder to get in the air.

Competitive Seasons are 3-4 months long with new challenges, a new rocket pass, and a soft reset on all ranked playlists. Currently, Rocket League is in Season 5 and is slated to go until February 2022.

Soft resets are when everyone becomes “Unranked” and your overall rank is reduced slightly. You will also have to do your placement matches again. These matches are very important as you will most likely be playing players at a higher or lower skill level and will typically gain, or lose, more rank in these 10 matches than you would after you got placed. If you can win more than 50% of your matches here, you can expect to see your rank start off higher than last season.

Along with a new season, there are plenty of rewards to earn. With new challenges released through the season and a new rocket pass to level up, there are plenty of new items and titles to get. However, the most sought after rewards are the competitive, end of season, rewards.

Towards the end of the season, Psyonix announce unique rewards. The higher your rank, the more rewards you can get. Everyone starts in the Bronze tier, and with every 10 wins in that rank or higher, you will unlock that end of season reward. For example, in order to unlock the Silver rewards, you have to win 10 matches in Bronze or higher. Then you need to get 10 wins AND be ranked Silver or higher. This is cumulative through any playlist.

Here is how the rewards are typically given:

Additionally there are title rewards for hitting Grand Champion and Supersonic Legend in any competitive playlist and every extra mode playlist. Titles are as follows:

What is Matchmaking Rank (MMR)?

Like League of Legends, Overwatch, and other competitive games, Rocket League uses the ELO system. This system gives everyone a hidden Matchmaking Rank, or MMR, that goes up with every win, and down with every loss. This ensures people get paired up with others of their same skill level. While it’s not perfect, it does a pretty good job at keeping matches from being too one sided.

How to see MMR

MMR is a hidden score that increases or decreases based on wins/losses. In order to see it you will have to add a 3rd party overlay. The best one to use, in my opinion, is BakkesMod. This will allow you to see your score, along with other players, live as you play. There is also a ton of other features that come with it, but I won’t go into those here.

Each playlist has its own MMR score. Even the casual playlists and tournaments each have their own score. Typically when you win, you gain more MMR than if you had lost. So, unless you are playing with lower ranked friends, if you win at least 50% of your games, you can expect to keep climbing the ranks, until you hit about Champion I.

MMR for each Rank

This is the best table I have come across that shows MMR ranks and how they work. While each season changes the numbers slightly, they should be relatively close. You can also check out rocketleague.tracker for the current season MMR requirements.

What is the highest MMR?

As of season 5, there is no highest MMR. As you get closer and closer to the top of the leaderboard, the less and less MMR you gain. This is because as you win, the gap between you and others gets bigger causing you to lose more MMR than you would gain on a win.

So, lets say you win a game and gain 3 MMR but the next game you lose 9 MMR. You would have to win 3 games just to break even with 1 loss. At the very top, this is pretty much impossible.

As you can see from the chart above, the average rank of all Rocket League players is somewhere between Gold and Platinum. These distributions are pretty much identical for each playlist.

While you will improve a lot just by playing the game, here is a video for new players and seasoned veterans alike, covering 50 tips you should know.

Also, check out my 31 Essential Tips from my own experience of over 1000 hours of gameplay!

The Climb is Worth it

The overall ranking system in Rocket League is simple to understand and fairly balanced. However, you will need to put in some time to jump those hurdles and work your way to become a Supersonic Legend.

In my experience, there is a fairly big wall when you hit Gold and Platinum. As over 50% of all players lie within these ranks, it can be challenging to overcome and seem impossible. But let me tell you, it is worth it!

As you climb those higher ranks, and play against better players, the matches become more intense and getting that win is such an amazing feeling. There have been times where I’ll yell in enjoyment, as I hit that new rank that I have been trying to hit all season.