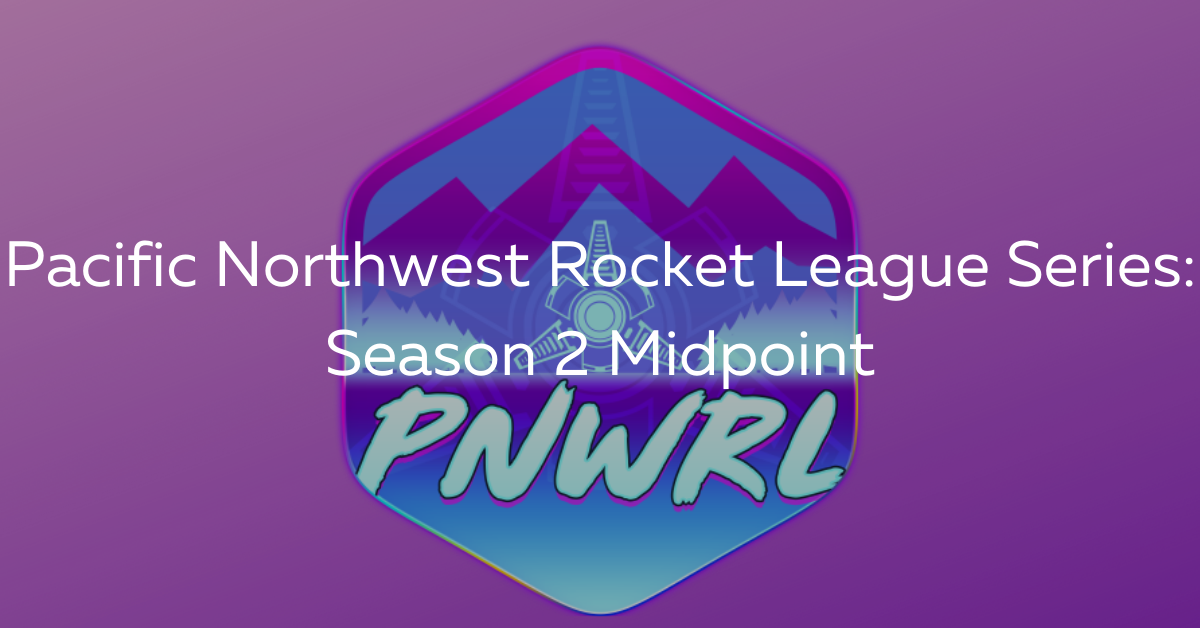 The Pacific Northwest Rocket League Series (PNWRLS) has officially reached the midpoint for season 2. It seems like it was just yesterday when this season started. However, 4 weeks later, we are at the cusp of the All-Star break.

7 teams are playing this season, each formed to comply with the new rules. You can read about these new rules and requirements for each team in my previous post.

Let’s take a look at the teams and see how their season is going.

Starting off with the team I am on, Alpha Impact. We have had some amazing matchups this season. Going into game four in 80% of our matches, each series has been really close.

Unfortunately, we have run into the issue of not being able to practice together as much as the other teams. This has put us at a disadvantage when it comes to team plays. However, we plan on making a strong push in the second half as each of us have that thirst to win it all.

Polarity has had a decent start to the season. Besides one game against Little Giants, there hasn’t been a difference of more than three goals against their opponents. These matchups have been very close.

Polarity is currently sitting in third place and are definitely a top contender. Forcing a game 5 versus Little Giants and getting a win off of Suspect Gaming is no easy task. Definitely keep an eye on this team.

Suspect Gaming has been around since season 0 of the PNWRLS. This season they look like a whole new team, however. Last off-season they have practiced rigorously together, and it has paid off.

Starting the season, Suspect Gaming lost their first two matches. Since then, they have only lost one match. And that was a four game nailbiter. They have proved to be a top caliber team this season.

Another team that has been around since season 0. Ball Chasing Dogs are once again near the top of the leaderboard. Qrouton leads the way in points per game and goals per game while Krumpets also leads in shot percentage.

Ball Chasing Dogs have gotten really good at peppering the goal. They don’t push up too hard but are always in position to intercept when their opponent tries to clear. This, in turn, has led to a power heavy offense that consistently delivers.

Little Giants is one of my favorite teams to watch this season. They may not have the fancy aerials or backboard reads. But they do play good old-fashioned Rocket League.

Every shot is hit hard and on target. Averaging 3 goals per game, it’s no wonder they are in first place. Little Giants are the clear favorites at this point in the season. However, anything can happen before the playoffs.

My Heart Your Tonkas

My Heart Your Tonkas is a sleeping giant. They may have gotten off to a slow start, but they have not made it easy for the other teams. They have beat Suspect Gaming and taken Little Giants, Polarity, and Ball Chasing Dogs to a game 5.

Each player on MHYT is somewhat new to the league, so there is going to be a learning curve. But looking at how they have improved as the season has gone on, makes me think they have a good a shot as any to take the season 2 crown.

Totes McGoats may be sitting in the bottom half of the standings but don’t be fooled. Keel is still the reigning champion of season 1 and he even played with AVJ in season 0.

Also, Totes McGoats have made it to a game 4 in all but one match. These guys are right there and with how even the teams are this season, it is still up in the air if Keel will get dethroned or not.

Here are the current standings as of this post:

These standings are close! With teams getting time to take a break and get some more practice with each other, things could shake up in the second half of the season. Don’t forget to subscribe to the twitch channel to catch all the action, including the all-star game.

Season 2 kicks off again starting March 7th and will conclude on March 28th. The post season tournament will be held on April 3rd, so be sure to mark your calendars.

Will Little Giants be able to hold on to the number 1 spot? Can Alpha Impact rise from the bottom? The second half of the season is sure to be spicy!