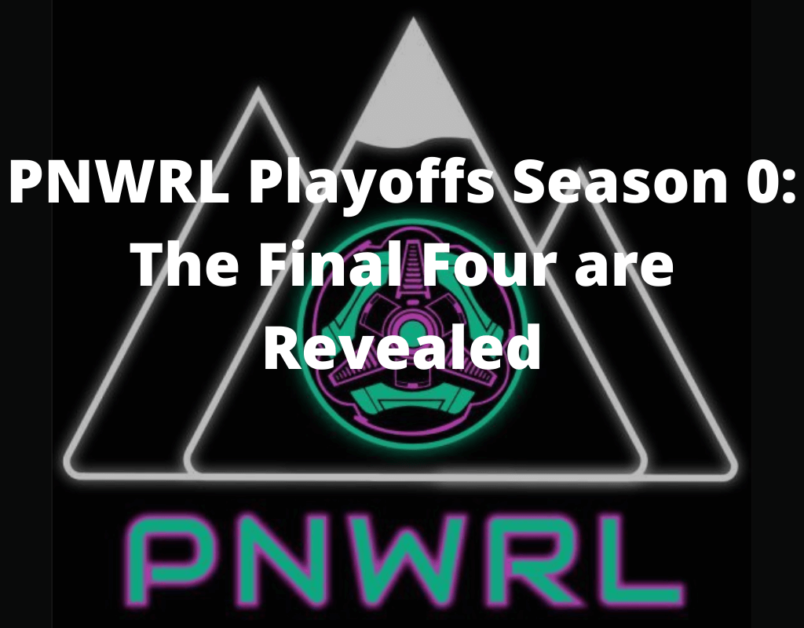 Week two of playoffs is here and gone. We got down to our final four teams who will play next week for the season 0 championship. If you missed all the action of week 1, check out my recap here or go to the official twitch channel for PNWRL. Now let’s take a look at how this week went and what we can look forward to in week 3.

Washington RL Team may have come in eighth in standings, but they were not a pushover. As we saw them beat the Grizzlies in game one, I thought we were going to see an upset. However, Sheptastic was just warming up. As we saw in games two, three, and four, he became “uncorked” and totally dominated. Looking at the stats for those last three games, Grizzlies scored 14 goals. Ten of those goals were scored by Sheptastic. No wonder he was the goal leader this season. And with that, Washington RL Team was eliminated and the Grizzlies moved on.

Losers Round 2: California Grizzlies vs Second Round Exit

What a matchup! Everyone got their money’s worth with this one, going all five games. With Krumpets and Qrouton popping off for Second Round Exit in games one, it sure seemed like it was going to be one sided. But just like the previous matchup, Sheptastic became “uncorked” and this time, shared the love with his team. Grizzlies were firing on all cylinders in games two and three, even shutting out SRE 5-0 game three. However, Qrouton and his team didn’t panic as they came back to win it in games four and five. Knocking the California Grizzlies from contention, and moving on to the lower round semi-finals.

Losers Round 2: Zero Impact vs Kiss My Anthia

Unfortunately due to scheduling conflict, this game was not aired. Even though Zero Impact is my team, I feel this was definitely the match of the week. KMA has always put up a good fight against us and during the regular season we went 1-1 with them. I have been playing with, and against, MCBRITCHES for years now and I could see the vast improvement he and his team have attained in the last 8 weeks. With all but game 3 being a one point difference, this was one close matchup. I wish KMA the best of luck in the off season, and look forward to our matchups in season one!

This matchup was one I was looking forward to all week. A best of seven matchup with Vigilantes vs Aerial Astronauts. These two teams always gave a good show in the regular season, making it a four game series each time. We instantly got to see these two show off their skills by going into overtime in game one. However as the games went on, Vigilantes got hotter and hotter. The connection between Mickalodian and GoldenLeafRanger was spectacular. The passes were on point, and by game four, they secured the match win by shutting out Astronauts 4-0. Congrats to Vigilantes for making it to the finals!

What to Expect in Week 3

With the finals coming up next week we already know one of the teams playing for the championship. Vigilantes have been unstoppable lately, and without a doubt deserve to be in the finals. But who will play against them?

My team, Zero Impact, will be playing Second Round Exit first. SRE came into the playoffs as the second place team, so it will be a tough matchup for us. Having lost 0-2 in the regular season versus them, hopefully third time is the charm and we can force an upset.

The winner of the previous match will go on to the finals of the losers bracket, versus Aerial Astronauts. This matchup will be a good one to watch. Versus us, they won 2-0 in the regular season. However, versus SRE, they lost 0-2. But this is playoffs, and in a tournament setting Aerial Astronauts play a lot better than normal. Because of that, I believe that they will be the favorites to win whether its versus SRE or Zero Impact.

But in the end, my guess is that Vigilantes will be the champions. The only team to beat them was SRE, and that was the beginning of the season. They play super fast and their teamwork is far superior than any other team in the league. Flask has put together an incredible team. With Mickalodian and GoldenLeafRanger on the same page lately, I just can’t see any team winning a seven game series against them. Let alone twice in a row!

Either way, these matchups will for sure be incredible to watch. You can catch the action starting next Saturday April 3rd at 6:30 PM PST on the official PNWRL twitch channel.