PNWRL Playoffs – A Captivating Beginning to the End of Season Zero 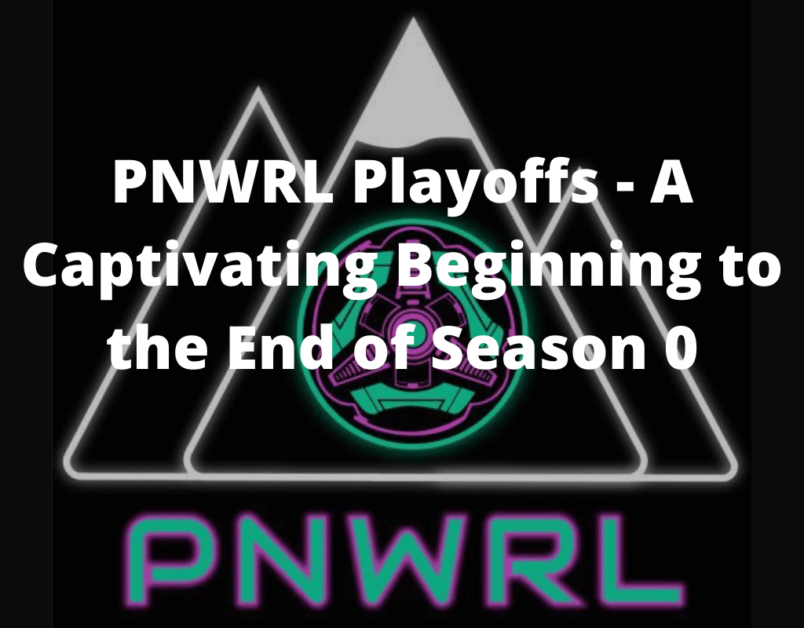 Season Zero of the new Pacific Northwest Rocket League Series is wrapping up and we have made it to the playoffs! If you missed the action of the regular season, check out my quick summary here. You can also catch the live replay of most of these games on the PNWRL Twitch channel.

The playoffs are setup as a double elimination tournament, played over two weeks. Games are best of 5 with the finals being a best of 7. This week we saw Stage 1 and Stage 2 of the winners bracket and one game from Stage 1 of the losers bracket.

Second Round Exit vs Poopsie Party

First game jitters were with Poopsie Party as Qrouton and his team completely dominated. But, in the second game, Poopsie Party held thier own. Only giving up two goals while saucy was able to get them on the board at the last second. Game three was crazy as it was tied 2-2 going into the final seconds. Unfortunately, as the clock hit zero, Qwark had an unfortunate wiff sending the game into overtime. There, six seconds in, Henrizzle sealed the deal and scored, sending them to round two.

Aerial Astronauts vs Kiss My Anthia

Games one and three were very close and I am sure in a rematch, it would have gone to a game five. Unfortunately for KMA, Keel, Ox, and AVJ went off in game two, securing the first “Brazil” of the playoffs. For those who don’t know, when you get “Braziled” it means you lost 7-1, just like Brazil did in the World Cup semifinals in 2014. That being said, KMA is going to be a force to be reckoned with in the losers bracket!

This matchup wasn’t aired due to a scheduling conflict. With Cupboard not able to play, Washington RL Team was in trouble before the games even started. Going up against Flask and his team is no easy task. But they made it interesting, keeping it close the first two games. If I were to give the award to most improved this season, it would definitely be Washington RL Team. And, even though they came in last, I wouldn’t be surprised if they move on in the losers bracket.

There was no live stream of this match due to a scheduling conflict. This matchup was very fun, even though California Grizzlies had to play without Granwe. Instead we saw PaRa_BeLLuMxX in his place. It was a close matchup, and I’m sure with Granwe it would have gone to game five. We were just in sync with each other, KhaoKG making great passing plays and Darkblitz getting some aerial shots in. Practice pays off, and I am glad to see how much my team has improved. On to the next round!

What a tough match! Zero Impact was going toe to toe with Vigilantes in the first game, however in the end, Vigilantes’ speed and teamwork was too much to keep up with. There were several times I thought I was playing quick, getting into the air, only to be beat by Mickalodian or GoldenLeafRanger. I really hope we get to get some redemption against them, but it is going to be a tough road in the losers bracket with KMA in our way.

Second Round Exit vs Aerial Astronauts

What a match to watch! Back and forth going all the way to game five. However in the end, second round exit got knocked out…..in the second round. I am very sure, and like the commentator MCBRITCHES stated, we have a good shot at seeing these two teams play again in the losers finals.

Poopsie Party vs Kiss My Anthia

This match was very very close, however in the end, Kiss My Anthia pulled it off and eliminated Poopsie Party from the playoffs. Each game was a nail biter, with only a one score difference each time. Both teams have improved quite a bit since the beginning of the season and I look forward to next week, where my team (Zero Impact) will play KMA.

Besides some scheduling conflicts, this first week of playoffs was very smooth. We saw each team perform very well, showing off their improvements and teamwork throughout the season. As we get closer to the finals, expect even more crazy, nail biting matchups. Will anyone be able to take down the mighty Vigilantes? What upsets are in store? Tune in next Thursday to catch the action on the official PNWRL Twitch channel and see who will come out on top!