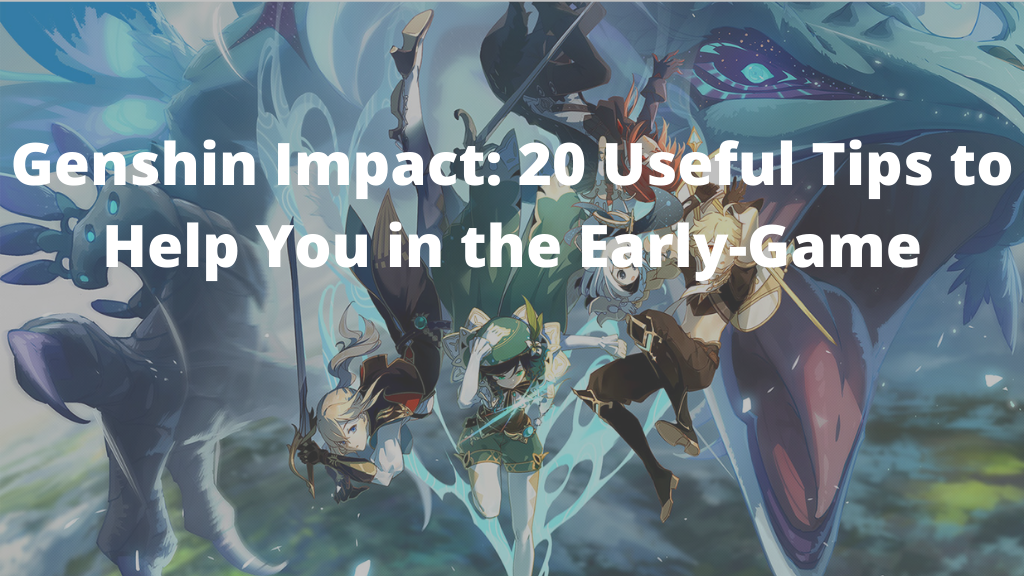 Genshin Impact is a vast, open world game. Full of places to explore and puzzles to solve, it can all seem very overwhelming just starting out. And, while Genshin Impact does a good job at explaining some things as you encounter them, there is a lot that I had to figure out later in the game that I wish I had known sooner.

To help out new players, I have come up with 20 helpful tips that will make your travels in Teyvat a lot easier.

One of the most amazing things about Genshin Impact is there is practically infinite inventory space. That means if you see anything that can be picked up, pick it up. Who knows if it will be used later as ascension material or needed for a cooking recipe. There is absolutely no downside.

Elemental reactions are what make the combat in Genshin Impact so unique. Every element has certain reactions with different elements. When forming a party, it is crucial to understand what elements trigger which reactions and to play around that. And don’t forget, the main character has the ability to learn each element as the new zones unlock.

Also, the environment has plenty of ways to add reactions to your fights. Fighting in a grassy field? Use pyro to ignite the grass and spread the fire. Did it just start raining? Activating cyro abilities will put enemies in a permanent freeze.

Upon reaching adventure rank 12, players will unlock a quest called “Every day a new adventure“. Upon completion of this quest, 4 missions will appear each day to be completed. Be sure to complete these as they will reward you with mora, ascension material, primogems, and a lot of adventure rank experience. Completing all of these quests will only take about 10-15 minutes and should be the first thing you do each day.

Upgrade Statues of the Seven

Statues of the Seven are scattered throughout Teyvat, acting as a fast travel location and will provide “vision” of the map as you find them. These statues can be upgraded with their respective oculi that you can find in their regions. For example, in Mondstadt there are anemoculus scattered around that can be collected. Bringing enough of these to the statues will raise its level and provide adventure exp, sigils, primogems, and (most importantly) a slight increase to your stamina. Using an interactive map will help you find those oculi and save you a lot of time and frustration.

Use Statues to Heal

Another great use of the Statues of the Seven is that they are a great way to heal your party. Statues share a reserve of HP called “Restorative Power”. The amount that can be healed is 5000 times the number of statues found. Restorative Power replenishes 1% every 15 seconds (fully restored in 25 minutes). Since teleporting is free, it is always best to stop by a Statue before or after a big fight.

Original resin is a resource that will unlock chests at the end of dungeons, boss fights, or ley line activities. There is a cap of 160 resin and it replenishes 1 every 8 minutes. As it is a replenishing resource, resin should stay at 160 for as little as possible. In the early game, there really isn’t much to use it on. Ley lines and bosses will be the best way to use resin early on, as dungeons aren’t really worth it until you start getting near mid game or need weapon enhancing material.

There are also items that will restore resin. Fragile resin and Transient Resin will each restore 60 resin, and can set you over the 160 cap. However, these items are expensive and hard to come by, so it is recommended to save them for the end game.

As a free to play player, primogems are best spent on fates, or wishes. Genshin Impact is a gacha game, and as such, you will need to spend time making wishes (and praying to RNGsus) to add new characters to your roster.

There are two types of fates that can be acquired, Intertwined Fate and Acquaint Fate. Intertwined fates can only be acquired through the primogem shop and special events. As such, it is best to spend your hard earned primogems on these first as they are used in the special event wishes that have increased odds of certain 5-star characters and 5-star weapons. Acquaint fates are acquired through events, achievements, character ascension, the shop, and certain quests and are used in the standard wishes.

Focus on Leveling One Party

What this means is, try to level out 4 or 5 characters that you plan on playing for a while. It may be tempting to level up every character you get, but that is part of the end game. Ascension materials can be tough to come by and will take considerable time to farm as you reach higher levels.

Any party can carry you to the late game, granted you equip the proper artifacts and weapons. Unfortunately, as this is a gacha game, the best weapons can only be pulled from wishes.

This is probably the most overlooked tip on this list. It took me until AR 30 before I knew I could level up talents. You can find your talents under the character screen. Some don’t unlock until characters reach certain levels, however. It’s also recommended to max your main dps’ first talent and your support’s second and third talent. Talents take the same material to level up as the characters ascension, so it’s best to try to max the talents first before ascending if you can.

Events come in many forms and are typically available to everyone. They can range from story quests that span several weeks, to simple log in rewards. Either way, events always offer great prizes with tons of mora, experience scrolls, and enhancement ores.

Typically, there will also be a special character banner and weapon banner event that will increase the chances of certain characters and weapons to be pulled. You can check the Genshin Impact wiki for current and upcoming events.

When you first look at the map, it will be barren and will not have many icons marked on it. You can, however, add custom markers or pins. If you find some character ascension material like flowers or a pack of monsters, it is best to mark it on the map for future reference. This can also come in handy if you have located some oculi but are in a hurry or can’t figure out how to reach them yet.

Many people think that holding sprint is the fastest way to travel around Teyvat. However, if you tap the sprint button, your character will do a short lunge then go back to their normal run. This lunge is actually faster than sprinting and if you combo it with constant lunges, you will end up moving faster and going further. There is also an advanced technique called a bunny hop that is faster, but timing that can be challenging and will actually be slower until mastered.

Once you reach Adventure Rank 20, you will unlock the battle pass. You can complete battle pass challenges (Daily, Weekly, Period) to level up the pass and unlock cool rewards, even for f2p players. There are 50 levels and each level can be bought for 150 primogems. You can also purchase the premium pass for real money (10 USD), which will offer more rewards and your choice of 4-star weapon upon reaching level 30. The best part is that you can wait to buy the premium pass until later if you want. You will be able to collect any premium reward from any previously unlocked level.

Artifacts are very important and are pretty much required on everyone in your main party. However, it is best to wait until AR 40 (mid game) before trying to farm for your characters best-in-slot artifacts. The reason is that you will spend crazy amounts of resin to finally get one decent artifact. However, until AR 40, there is a zero chance at getting a 5-star artifact that will just replace any previously earned artifact. You will acquire many artifacts, just for playing the game, that will suit you just fine until mid-game.

Spiral Abyss is another domain that can be found on the eastern side of Mondstadt and will be unlocked at AR 20. This dungeon is very difficult and only recommended for end game players. However, in order to unlock the best free-to-play character Xiangling, you need to complete floor 3. For tips to complete this challenge, check out this video for some good advice.

I highly recommend playing through the main quest (archon quests) as much as you can, as it will unlock new areas and increase your adventure rank fast. You won’t be able to just blaze through the whole campaign right away, however. Missions will be available once you hit certain AR levels. So, my advice is to complete as much as you can until it requires a certain AR to continue. Then go back and explore, do dailies, etc. until you are able to continue.

Once you hit adventure rank 20 you will notice that your world level (WL) has increased from 0 to 1. After AR 20, every 5 levels, your WL will increase by 1. Each increase will increase monster/boss level and rarity of loot. Typically, your WL will increase automatically, but at AR 25, 35, 45, and 50 you will need to complete a dungeon to advance. Complete this as soon as possible because the higher-level monsters will drop higher-level ascension materials that you will need to strengthen your characters. If you run into trouble with monster difficulty, you can always play coop and meet other Genshin Impact players.

Use the Alchemy Bench

Each region’s major city has an alchemy bench that is invaluable at helping ascend characters. Here you will be able to convert your lower tier materials into higher ones. For example, you can exchange 3 slime condensate for 1 slime secretion. This is a great way to help ascend characters at a higher level that don’t need the lower tier items. Also, keep an eye out as certain characters can add a buff to the alchemy bench.

Mora is the main game currency and is used in everything from crafting to enhancing weapons. It can run out fast. Luckily, you can sell all of those unused 1-, 2-, and 3-star artifacts for Mora! The only catch is they must be at level 0, and you can only sell 4-star and under artifacts (however, it is not recommended to sell 4-star artifacts). Just be wary that sacrificing other artifacts is how you level up the ones you want to use. So, you should only use this method to get Mora if you absolutely need it.

When using these items, be sure to not exceed the amount needed or you will waste experience. For example, if you need 47,000 experience to get a character to level 30, don’t use 3 Hero’s Wits. That’s a waste of 13,000 exp! Instead, split it up. Use 2 Hero’s, 1 Adventurer’s, and 2 Wanderer’s. Finally, if you need to get less than 1000 exp to level up, it’s best to not use any scrolls and get that experience through adventuring.

With these 20 tips, you should be able to reach mid-game with a great understanding of the game and have a strong team to take you to the endgame.